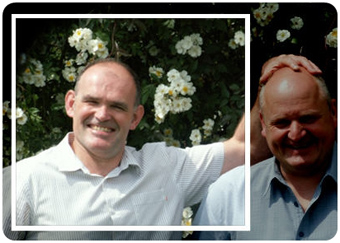 I was born in Wilmslow in 1956, where my father had a thriving garage business. After leaving school and college, I worked in a greengrocers and assembled gas meters for while, before deciding that I needed to be a little more serious. I chose accountancy and qualified as a Chartered Certified Accountant in 1985 and whilst I do not fit the common view of an accountant, my qualification gives our customers the benefit of knowing they are doing business with professionals.

As Mark A has said, I reached the dizzy heights of Commercial Director for a machinery importer but got fed up with the routine and wanted something a bit different. So, in 1990 I started a finance broking business and this has continued, in different forms, to where I am now.

My wife Louise, is a farmer’s daughter; my daughter is reading music at Nottingham University and my son is about to attend vet school at Bristol. I am treasurer and supporter of our local church in Bosley, which is a rural parish, and in autumn 2012 I was appointed as an expert witness in a divorce case involving a mortgage for a property with an agricultural restriction which, in our sector, we see a lot of.

I am often asked why I continue to operate the business in the way that I have since 1990 – that is in a small and hands on way. The answer is simple but two-fold; firstly, it is important that our customers deal with the organ grinders and secondly, my closeness to home has meant being able to watch my children grow up. What matters is quality of life, which is why, when we help customers, we see things in how what we do will improve their lot.

Bringing Mark A into the organisation was the right thing to do as he shares the same values of honesty and integrity that I believe in.

We love the countryside and we know why people want to live in it and what makes rural folk tick. When you talk to us, you won’t find it like talking to the bank manager or a lawyer but real people with whom you can do business.

We hope we are the natural choice to arrange your farm finance.

I started work in banking at the age of 16 with Lloyds TSB, or Trustees Savings Bank, as they were known then.

I was promoted several times and moved from branch to branch before deciding (after 10 years) that I wanted a field based job. I was offered a position with the Royal Bank of Scotland, on the asset finance side of banking, and was with them for 7 years, before being offered a better position with part of the Alliance and Leicester group in Manchester.

I enjoyed 7 years with them, before being made redundant due to restructuring, and was subsequently offered a job with Fortis Lease. It was whilst I was with Fortis that I became increasingly disillusioned with the big company mentality and the associated politics. After 2 years I decided enough was enough and I joined Mark Bracegirdle at Farm and Country Finance. We had discussed doing something together for a long time, but it was then that the time seemed right.

Mark and I have known each other for a long time. I first met him in 1988 whilst on a sales call when I was working for Royal Bank of Scotland. Mark, at the time, was working as a commercial director for a printing machinery importer. We got on extremely well from day one, our friendship deepened and the rest is now history.

I like to think we share the same ethos of honesty, integrity and hard work and we certainly work well as a team.